In the high desert of southern Colorado, trouble is brewing with the tenacity of a summer thunderstorm. Archaeologists Sandra Archuleta and Forrest Campbell are prepared for a season of heat and monsoon flash floods in their quest to unlock the mysteries of an ancient native civilization. But they are about to discover that there are far more treacherous forces at play in the canyons.

Set in the Four Corners region of the American southwest, The Scorpion in the Tower brings to life contemporary issues like Native American rights and the environment with electrifying suspense. Shot through with iconoclasm reminiscent of Edward Abbey, and wit and authenticity that call to mind Sherman Alexie, the novel takes the reader on a beautiful and harrowing adventure.

Sandra and Forrest are conducting field research in the Canyons of the Ancients National Monument, Colorado, trying to determine what became of the Anasazi. But their studies are laid aside when they are drawn into helping rescue a stricken child.  Before long they are enmeshed with a small Zuni group on a mission to relocate their ancestors’ skeletons, away from encroaching natural-gas development. In the labyrinth of canyons that the group considers sacred, a flash flood separates the two scientists and they begin divergent treks out of the narrows.  Sandra finds aid from a band of environmentalists who are keeping watch on mining in the area, while Forrest finds himself with the Zuni, for whom he carries one of the skeletons.

Just as their ordeal seems to be ending, Sandra and Forrest, still separated, face much graver dangers. The Department of Homeland Security has sent its agents into the backcountry in pursuit of “ecoterrorists,” mistakenly including the Indians as quarry.  And lurking in the canyons is a renegade biologist who is stalking the Native Americans. His objective is to steal DNA from their blood and their ancestors’ skeletons, thinking he can prove a seminal tenet of the Book of Mormon.

How will Sandra, Forrest, and their saviors escape with their lives and freedom? And what of the priceless natural and cultural legacy of the threatened land? In an ancient stone tower on Wild Horse Mesa, these questions collide in a stunning climax.

Part thriller, part meditation on a beautiful region and its remarkable people, The Scorpion in the Tower portrays the competence of contemporary Native Americans within two worlds, without succumbing to the tropes of noble savages or hopeless victims of history.  The book alternates between the points of view of the two protagonists, heightening the contrast between their personalities and their growth, culminating in their reunion on an Anasazi hand-and-toe-hold trail high on a sheer cliff on Mesa Verde. 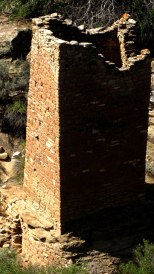